POST: Answering a Cry for Help with a Touch of Humanity

Dr. Margaret Cary helps a distressed stranger and recalls one of the main reasons she went into medicine. 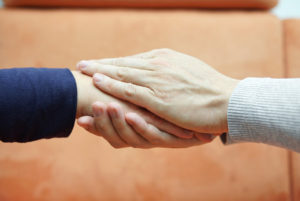 I was at a Falls Church superstore checkout counter when I heard her cry. My first reaction to nonthreatening inappropriate sounds is to ignore them and leave the area as soon as possible.

I turned to look and saw three store employees around a sobbing middle-aged woman. I returned to the checkout.

I was tempted to just leave the store with my purchases and go on to the next errand. I walked toward the woman instead.

By now, there were four people around her, all looking uncomfortable. Store security had arrived. I said, “I’m a doctor.” They looked at me with the tiniest hint of relief.

It had been so long since I was in the doctor role that I took a few minutes to think this through. I am in administrative medicine, so I do not carry malpractice coverage nor am I licensed in Virginia. Fortunately, the old training seems to be hard-wired and returned immediately.

Rising above all other thoughts in my mind was that this was a person in trouble. And the folks who would like to help her were at a loss. Mental health issues are still not understood. People with them are not given the same sympathy and patience given to heart attack victims or amputees.

I took stock of her: White female, between 50 and 60 years old, she looked well kept, was wearing clean clothes, gold jewelry—just enough, not flashy, had a nice haircut, and was sitting on the bench at the store’s entrance, wailing. Stroke? Maybe, but not anything that affected her physical mobility. Yes, she was using a walker, but did not seem to favor one side. Her facial muscles were intact. She was perseverating, repeating the same phrase over and over. Maybe a mental challenge? Could be. You know how you know when pets are lost and not strays? They have the look that someone cares for and about them. She had that.

I sat on the bench beside her. I looked into her eyes and said, “I’m a doctor. Can I help you?”

I wanted to touch her, to make that human connection. Touching, now there is something that has changed in the last couple of decades. The only safe place to touch someone is on the shoulder and elbow and the upper arm. I took a chance and touched her forearm, then held her hand.

She started to make a call on her cell phone and then handed it to me, seeming confused. No numbers saved. When I handed it back, she called a number and howled into the telephone. She handed the telephone to me again. I introduced myself and then asked with whom I was speaking. He told me he was her husband and that she had lost her prescription, but her brother, a doctor, would call in a new one. He could not come to get her because he had bad knees.

At the end of the call, she jumped up and started across the store, tears dried, and retraced the steps several store employees had already made, looking for her lost prescription. I walked alongside and called her husband. I asked him to explain to her that she would get a new prescription, which he did and she stopped.

I retrieved my cart and started to leave. “Thank you for your help,” a store employee said. “You were really good with her.” I sensed that the employee wished she could have done more for the woman.

“Anyone could do it,” I said. It’s about talking with someone at his or her level. It’s also about the physical contact. I remember a teacher once telling me to touch patients or they might believe you thought they were untouchable. Of course, you have to be careful.

I thought to myself, we lose something by being afraid of each other.

I was relieved that store personnel had not called the police, which people sometimes do when others are acting oddly, seemingly without reason and creating a scene. That is often the quickest, easiest way to eliminate someone acting out of the ordinary. We are unused to helping someone who might benefit from our taking the time to listen. We don’t know what to do and so, calling the police or an ambulance often seems the most expedient solution. We still have a long way to go with mental health patients.

I reflected on my initial reluctance to get involved—too busy, I might be sued, what can I offer anyway.

Fortunately, my core, unprocessed feelings came to the surface, overriding the cool, “sane” approach. I helped someone in trouble, one of the main reasons I went into medicine. That compassion and desire to be of service were still with me.

I headed for the door.

In Medicine, The “Soft” Skills Are Essential

Michael’s Story: The Beginning “I’m straightforward, to the point,” said Michael, the CEO at a large inner-city hospital. “The people I work with—they may not like me, but they know I’m right.” “What else?” I said to Michael, whom I had just been retained to coach.  “I just wish they understood me. I do what’s […]

Dr. Margaret Cary spoke at the American Society of Hematologists

December 3, 2018 Dr. Cary delivered an interactive presentation on Women’s Leadership at the Women in Hematology reception at the ASH’s annual meeting of nearly 28,000 attendees in San Diego.

What We Can Learn About Leadership from The Boss

A Bruce (The Boss) Springsteen fan reflects on what her coaching clients can learn about leadership from him.

CATEGORY: The Doctor Weighs In

What might you do to develop a coaching culture in your office, in your organization? “I know I blow up and get angry. I am protective about my patients and the physicians in my department and I can’t help myself.” Dr. Leonard was one of my coaching clients, a surgeon who had left a trail […]

The Value of Coaching in Medicine

With Jack Penner Jack and I recently joined Dave Etler, Administrative Services Coordinator for Student Affairs and Curriculum with Carver College of Medicine at the University of Iowa, and Carver medical students Amy Young, Aline Sandouk, and Mark Moubarek at The Short Coat Podcast for “weird news, fresh views, helpful blues, and interviews by students, for students” […]

The Value of Presence in Medicine

When an American doctor is asked to examine her friend’s mother in a Chinese hospital, she realized it was her presence and caring that really mattered. Zhuo came with a self-assured attitude, lots of stories, and several films under her belt. I had volunteered to host a film director during the Denver International Film Festival. […]